Music and laughter filled The Plaza in Stockport as a long-running broadcasting double act brought the curtain down on their live charity theatre shows.

During that time the pair, who are brothers-in-law, have staged dozens of spin-off charity shows around the region, raising around £600,000 for charity.

Their farewell performance attracted a capacity audience to The Plaza and raised £12,000 for St Ann’s. The total included a bucket collection of £1,300.

A host of acts who have appeared on the bill at the variety shows down the years took to the stage on an emotional night of nostalgia.

They included Buzz Hawkins and The Bradshaws, the fabulous fictional family he created, plus film and TV actor John Henshaw with his band The Bewildered. 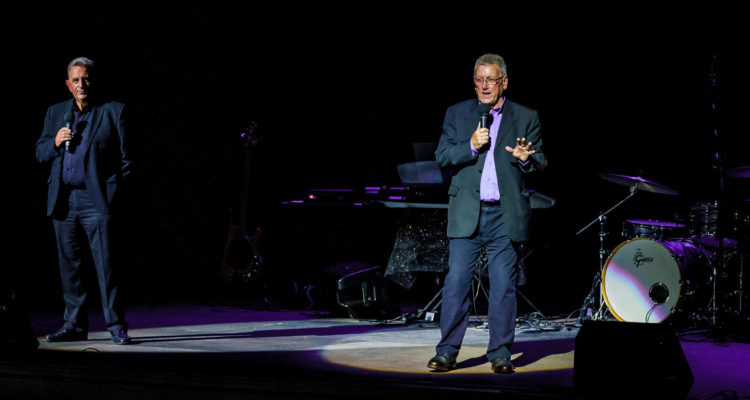 “We can’t thank our listeners enough for all their support and we hope they enjoyed our final fling. The show was our last one as we come to the end of our 32-year radio broadcasting partnership and since we started the live theatre shows our loyal audiences have helped us raise a staggering amount for various charities, large and small, in Greater Manchester. It was fitting that this final show at The Plaza was in aid of St Ann’s, which is celebrating its 50th anniversary and embarking on an ambitious capital campaign to build a new hospice.”
– Eamonn O’Neal, Director of Strategic Initiatives at St Ann’s Hospice

We need a new St Ann’s Hospice. For patients.
For families. For everybody in our community.

Share our story on your social media and help to spread the word. Let’s build it together.